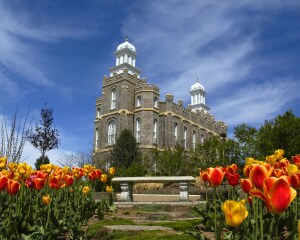 Edna Mary Russell passed away peacefully at home on Monday, February 15, 2021. Born August 10, 1927 to Leslie Merrill Hansen and Mary Ellen Cragun Russell, Edna grew up in Ogden, Utah but she spent much of her life experiencing the world.  These adventures began when she married the love of her life, Ivan Chancy Russell, on January 1, 1946.  The couple spent the next 3 years in Hawaii enjoying the beach and building many wonderful memories before going on to spend time traveling and living in Bonn, Germany,  Heidelberg Germany, Tel Aviv, Israel and Misawa, Japan.  They raised their family while traveling the world. Though they lived in Ohio for a short time, the couple eventually returned home to Utah to spend the rest of their 67 years together.  Edna was preceded in death by her parents Leslie and Mary Hansen, husband Ivan Russell, daughter Phyllis Van Cleef , and grandchildren Katherine Anne Russell and Jeremy Kendall Russell.

Edna was a life-long member of THE CHURCH OF JESUS CHRIST OF LATTER-DAY SAINTS.  She served in many callings including Primary President. A favorite memory is having Sacrament in many Biblical settings all over Israel. And, with only two or three LDS families in the country, she loved the intimacy and increased her Testimony.  At the age of 91 she received her Endowments at the Logan, Utah Temple and latter sealed to her husband Ivan, her children and parents.

Edna was a brilliant light who radiated love and joy to everyone around her. She always had a ready smile and a kind word.  She was devoted to her family and made a home wherever they went. She was clever and dedicated, working as an Assistant to the Principal in an elementary school in Japan, assisting her husband in his consulting business and in opening and running an educational toy store in Salt Lake City.  When an opportunity arose to move to Madrid she learned to speak Spanish, and when ultimately the move ended up being to Germany instead, she took it in stride, though she would joke about the lessons going to waste.  She was a talented painter, could reupholster furniture and enjoyed decorating.  Edna was patient and loving, sharing her abilities by teaching her grandchildren to sew and cook and to set a table that could seat three or thirty.  But most importantly she taught those around her how to be patient, how to be kind, and how to appreciate the world around them.

Edna was a woman of faith who shared her courage and devotion with her family and friends. She served her community and shared her caring through works such as knitting hats for the homeless and babies in the NICU..  In all things she showed a deep and abiding love for her family and for her faith. And while her light is gone from this world it surely guides us from the next.

Those wishing to view the livestream of the Services, use this link  https://facebook.com/pg/mortuarymyers/videos  to Edna's livestream.

Condolences may be expressed to the family at www.myers-mortuary.com

To send flowers to the family or plant a tree in memory of Edna Mary Russell, please visit our floral store.